How Oreo shone light on the eclipse

All eyes were on the sky on 20th March for the total solar eclipse, even if dark clouds meant most people missed out on seeing the celestial event of the decade for themselves.

It was also the marketing opportunity of the decade, especially for any brand with a round logo or product. But it was one round biscuit in particular that really seized the opportunity.

While dingy grey skies meant Londoners couldn’t see the actual solar eclipse, they did see an Oreo eclipse thanks to a digital out of home (OOH) advertising campaign.

Thanks to data from the Royal Astronomical Society and great work from agencies PHD media and Talon, a digital billboard at Piccadilly Circus showed an Oreo moving across a sun between 8.25am and 10.40am in real time as the eclipse happened. There were also boards in Coventry and Edinburgh displaying the Oreo trajectory.

Jonathan Holden, marketing manager for Oreo said: “We want Oreo to be an even more iconic brand in the UK. Playfully putting it at the centre of a moment where the whole country will be looking in the same direction makes this idea the perfect fit with that ambition.”

The dynamic advert was accompanied by the tag line, ‘You won’t have to wait another 11 years for one’ as well as the hashtag #OreoEclipse. 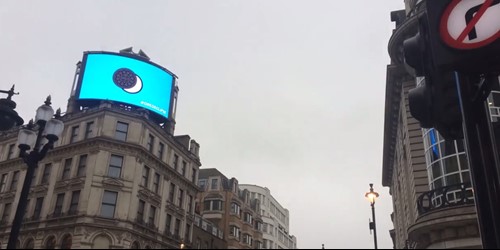 This was a great example of how different marketing methods can compliment each other. The spectacle of the digital billboards got people tweeting, while in turn, the hashtag was promoted, which got allowed people who didn’t get to see the billboards to still see the effect of the OOH campaign.

Richard Simkins, Innovations Director at Talon said, “We often talk about how data can improve the targeting of OOH campaigns. With #OreoEclipse we used astronomical data to build a wonderfully simple campaign only matched by the wonder of the solar eclipse itself.

“We have created a domination opportunity on multiple Digital Out of Home screens for the duration of the entire eclipse. This has created a unique opportunity for Oreo to entertain people with a wonderfully creative ad, delivered in real-time, that was literally out of this world.”

But Oreo didn’t stop there. A truly great campaign should be seen by as many people as possible. What about those who aren’t on Twitter?

Oreo had print covered too. FBC Inferno and Drum, Oreo’s marketers, had the genius idea to literally block out The Sun - the newspaper that is.

For the first time in the publication’s history, The Sun was issued with a translucent overlay cover, which blacked out the front page and back cover of the paper behind it with an Oreo eclipsing the sun taking pride of place in the centre of the page. And to bring the campaign full-circle, #OreoEclipse was printed along the bottom of the front page.

This just goes to show what some creative thinking and planning across multiple channels can do for a brand’s visibility. And more importantly, great teamwork between multiple agencies shows how reaching out to the right prospects can help to form a great strategy.

Contact us at ALF to find out how we could help you reach out to specialist agencies to deliver the ultimate multi-channel campaign.